The Best Energy Drinks To Power You Up This Afternoon

by John Diep
in Food & Drink
Reading Time: 8 mins read
A A
Share on FacebookShare on Twitter

From coffee-to-go to lattes, millions of people rely on caffeine for a morning and afternoon pick me up. But while there are many different types of coffee available that can serve as an energy drink alternative, not all offer the same kind of high you’re looking for.

Whether you have an all-nighter coming up or just need a little pick me up this afternoon, nothing beats an energy drink to give you the boost of vitality to make it.

Without further ado, if you are in need of a tasty energy drink to give you that extra boost for an important meeting or exam, then this is the place! Below are some wonderful options ranked according to taste. They all have their advantages and disadvantages but they will always leave you with a great feeling afterward.

Best Energy Drinks To Power You For The Week

It’s the number 1 go-to drink for anyone who wants an instant chemical energy boost. Redbull has the usual caffeine, sugars, and taurine.

It’s been dubbed the most popular energy drink since its conception in 1976 under a different name, Red Gaur. Red Bull has different ingredients depending on the country where it is made.

Redbull contains B vitamins to help metabolize glucose and fuel cells to deliver more energy to different parts of the body. It has enough sugar to provide consistent glucose, although Redbull has gone into making sugar-free variants of the energy drink.

In the sugar-free variants of Redbull, aspartame and other artificial sweeteners are used.

As for health concerns, Redbull doesn’t cause any side effects unless an individual is caffeine sensitive. A 250 ml can of Redbull contains a maximum of 80 mg of caffeine, which is well below the maximum daily caffeine intake for an individual (400 mg).

Rockstar has made several energy drinks for sportsmen and casual daily energy drinkers. One of the best tasting and guilt-free energy drinks they have is the Rockstar Pure Zero Energy Drink.

This energy drink is for individuals who don’t want extra sugar and just want a clean hit of caffeine. Each can of the Rockstar Pure Zero Energy Drink contains 240 mg of caffeine which is over half of the RDA. 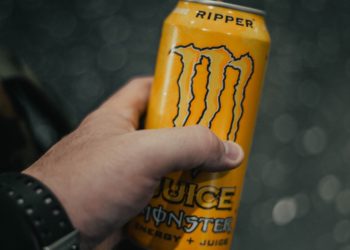 Monster is the second most popular energy drink in the world, second to Redbull. It’s popular among younger individuals, notably in the esports industry. Taste-wise, Monster Energy drinks are sweeter compared to the first two brands mentioned on this list.

They’ve made sugar-free versions to appeal to a much wider audience, but the energy boost it gives is more or less the same.

Each can of a Monster Energy drink contains two grams of carbohydrates, but it has 180g of saturated fat. There’s 70 mg of caffeine in each can, well below the maximum daily intake of 400 mg. It contains a lot of B vitamins, especially Vit B3, B5, and B6. 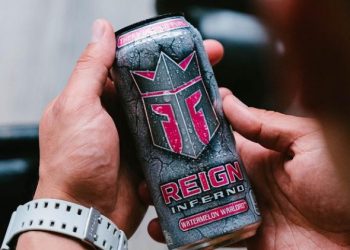 Reign is popular because of its fruit-flavored energy drinks. Each can of Reign Energy drink contains 100 mg of sodium, which is nothing compared to the RDA of 2300 mg, so you can drink Reign without worrying about your sodium intake.

For the Reign Melon Mania flavor, it has 35 mg of potassium and just a gram of carbohydrate. Vit B3, B6, and B12 have 50% RDA, but each can of Reign is actually two servings, so you still get 100% RDA for the B Vitamins.

Reign also has BCAA’s, or amino acids, that help with muscle recovery. It’s a good energy drink for people who lead active lifestyles, or those who spend a portion of their time dedicated to fitness if they’re not working in their office. 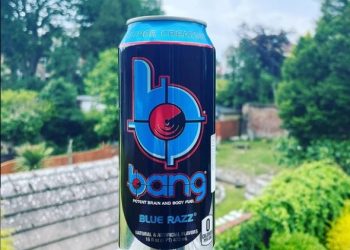 Bang energy drinks are like Reign since they contain zero sugar, and contain healthy amounts of sodium and potassium. A 16-oz can of Bang contains BCAA’s, creatines, and 300 mg of caffeine.

This means you can only drink one can of Bang before you go over the maximum daily intake for caffeine.

Despite being zero sugar, Bang still tastes palatable due to artificial sweeteners. The main contributor for the taste is sucralose.

Bang is good for anyone who has difficulty getting focused on their task, although the amount of caffeine means you should take this only at the time your performance is at its lowest (e.g. you’re sleepy in the afternoon).

NOS is an energy drink formerly owned by the Coca-cola company. They’re owned by Monster Energy but the ingredients remain the same. They’re distributed in 16 and 24 oz cans and were primarily marketed towards the motorsports industry.

Each can of NOS contains 160 mg of caffeine. It also contains the standard taurine found in other energy drinks, and Vitamin B6 and B12 necessary for nerve and brain function.

NOS comes in a variety of flavors like GT Grape, cherry, nitro mango, citrus, sonic sour, and many more. Unfortunately, since its acquisition by Monster Beverages, it has discontinued the production of some of the flavors.

The Amp energy drink has ingredients common to most products in the same category: taurine, caffeine, B vitamins, with the exception of ginseng and guarana.

Mountain Dew’s Amp energy drink originally had two flavors, Orange and Mixed Berry, but it has since then expanded into other varieties like cherry, grape, lemonade, and watermelon. Amp Energy drink also had a sugar-free version.

The caffeine content of each Amp energy drink is almost 150 mg. The UK variant of Amp Energy contains real sugar as is the tradition of most energy drinks made or distributed in the UK. 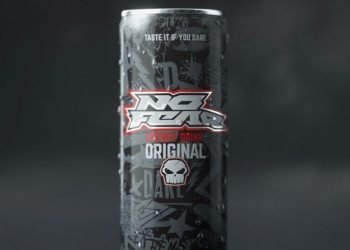 Although they’re more known as a clothing brand, No Fear actually made an energy drink in collaboration with SoBe. No Fear Energy Drink sponsored WEC (World Extreme Cagefighting, similar to UFC) and fighter Urijah Faber.

They also sometimes sponsor NASCAR and Philippines-based boxing Team Pacquaio. The No Fear energy drink is served in 16 and 24 oz cans. For the 16 oz can, it contained 182 mg of caffeine, which is still below half of the maximum RDA.

They’re still being sold in the UK and they’re not as popular in the US due to strong competition from newer brands like Monster Energy and Rockstar. They’re still distributed in Tempe, AZ by beverage company Shadow Beverages.

As for the nutritional content, No Fear’s Motherload contains high amounts of vitamins. Vitamins C, and B vitamins reach over 600% of the RDA, with taurine at 2000 mg.

This might not be the best No Fear energy drink variant for beginners, but it’s perfect for anyone who has built a tolerance for energy drinks and caffeine. 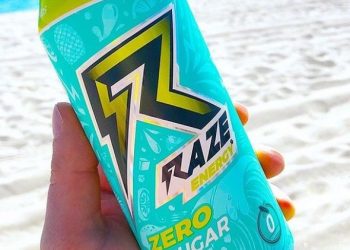 It’s not among the most popular energy drinks but Raze is one of the best tasting, understated brands. The makers of this energy drink claim that Raze gives the energy boost without the jitters and the crashes associated with caffeine-loaded and sugar-pumped energy drinks.

Raze also contains no sugar but it has artificial sweeteners for the taste. There are also electrolytes that help the body rehydrate, making this a perfect drink for both office workers and fitness enthusiasts.

Each can of Raze contains 55 mg of potassium and 15 mg of sodium, making it a healthier option than the other drinks on this list. Although it has 300 mg of caffeine, it’s on a slow-release mechanism which means you don’t crash after chugging a can.

This energy drink is marketed towards esports players and gamers. It almost has the same formulation as Raze, with 55 mg of sodium, but with a higher potassium content of 210 mg.

One can of G Fuel is 473 mL and contains 300 mg of caffeine. It’s a zero-calorie drink and won’t fatten you up.

G Fuel also has B vitamins and ascorbic acid, with the latter providing 50% of the RDA. G Fuel is available in Rainbow Sherbet flavor and they also sell energy drinks in the form of powders.

Their Fazeberry formulation is a powder-version of Gatorade – it doesn’t contain caffeine but it has tons of electrolytes that help rehydrate your body after an intense workout or gaming session.

Energy drinks function like coffee and should always be consumed in moderation. These also contain ridiculous amounts of sugar necessary to fuel energy-intensive activities.

The best way to counter excess sugars and caffeine would be to drink a lot of water to help flush out the excess chemicals from your body. Side effects of excessive energy drinks include insomnia, nervousness, palpitations, and in severe cases, brain and nerve damage.

Ghost Kitchens, Maybe a Good Idea After All

Ghost kitchens are almost on the same footing as virtual kitchens. Virtual because the order process is online, and dining is not an option. It's like regular restaurants using delivery, but this time, they're not accepting dine-ins. The business model...

Restaurant businesses are slowly recovering from the combined restrictions both the government and the pandemic created. Diners haven't had the chance to go out that much. A few restaurants have opened and closed but these seven places on the list...

Not exactly haunted, but ghost kitchens are the latest business expansion GP has. The ghost kitchen chain opened on March 8 of this year. It currently has a location in Santa Monica but can deliver to places like Beverly Hills....

Your Daily Coffee May Soon Be at Risk From Suez Blockage

News of the recent Suez Canal blockage by a container ship caused delays for merchants. It was only a few days but the effects were visible as the passage is a major maritime trade route. The effect had cost delays...

Senator Scott Weiner wants changes to the alcohol licensing. At least that's what Senate Bill 314 was about. The bill affects the Department of Alcoholic Beverage Control in giving out licenses. If successful, it will reduce the number of months businesses...

Dining out can get costly, especially if you want something tasty. However, it doesn’t have to hurt your wallet every time you go out to eat. There are lots of seriously amazing eateries around LA that are big on taste...

15 Best Food And Fitness Podcasts To Tune In Right Now

Most people would be more inclined to plug in their earphones on their commute to work and listen to music. At home, they would rather watch videos before turning in. And when they’re not doing anything, they’re probably scrolling for...

The 2021 Guide to 15 Coolest Restaurants in Los Angeles

Find where you can go in Los Angeles for the trendiest dining establishments to satisfy your foodie cravings. Are you in Los Angeles right now? Whether you’re just visiting or you live here, you really ought to try one of...

Hamburgers are pretty much the global definition of American cuisine so why should you settle for anything less than stellar? Here are twenty-one top-notch places in LA so you can always get the tastiest options around. When you think about...

Los Angeles' Koreatown is the pinnacle of Korean cookery in the United States, without any doubt. The food offered is astonishingly delightful, making even the most obsessive foodies from Seoul awestruck at both its quality and quantity. It’s the perfect...

The Best Energy Drinks To Power You Up This Afternoon

Why You Should Get Your Hands On A PPP Loan ASAP