Yes, cycling offers benefits for your physical health. But did you know that riding a bike offers a whole host of additional health benefits besides the physical exercise? It can enhance your brainpower, boost your self-esteem, and make you seem sexier too!

These 10 health benefits of cycling will make you healthier, sexier, and live longer.

Shedding weight and losing excess fat is one of the most popular health goals today, and that can be achieved with proper dieting and with exercises like cycling. One study conducted with older diabetic women showed that with cycling and dieting, they can lose visceral fat (the abdominal fat that surrounds your organs). Later it was found that the same principle applied to younger women as well.

Nowadays everyone is stressed. We’re all working too hard and worrying about various matters. Now exercise in general can help reduce stress, but cycling is one of the more effective exercises for reducing stress.

This was confirmed by a study that involved more than a million participants, so it’s pretty much a fact. The bike riders had 21.6% fewer days of poor mental health when compared to the non-riders. The effect of biking on stress matched the effect of team sports, but then you can always bike in a group to also reap the social benefits.

Cancer is undoubtedly one of the most common killers, but you can reduce your risk of cancer through a combination of several healthy practices. You can maintain a proper diet, exercise regularly (as in biking), and keep your weight to a healthy level.

There was a study that monitored almost 14,000 men. It was found that those who were fitter (which you’d be if you biked regularly) as they approached middle age reduced their chances of lung and colorectal cancer.

At least this has been indicated for men. The study found that men who regularly exercised on a bike can lower their chances of getting Parkinson’s disease. All you need to do if you’re a guy is to ride about 3 hours a week at speeds of 10 to 12 mph. 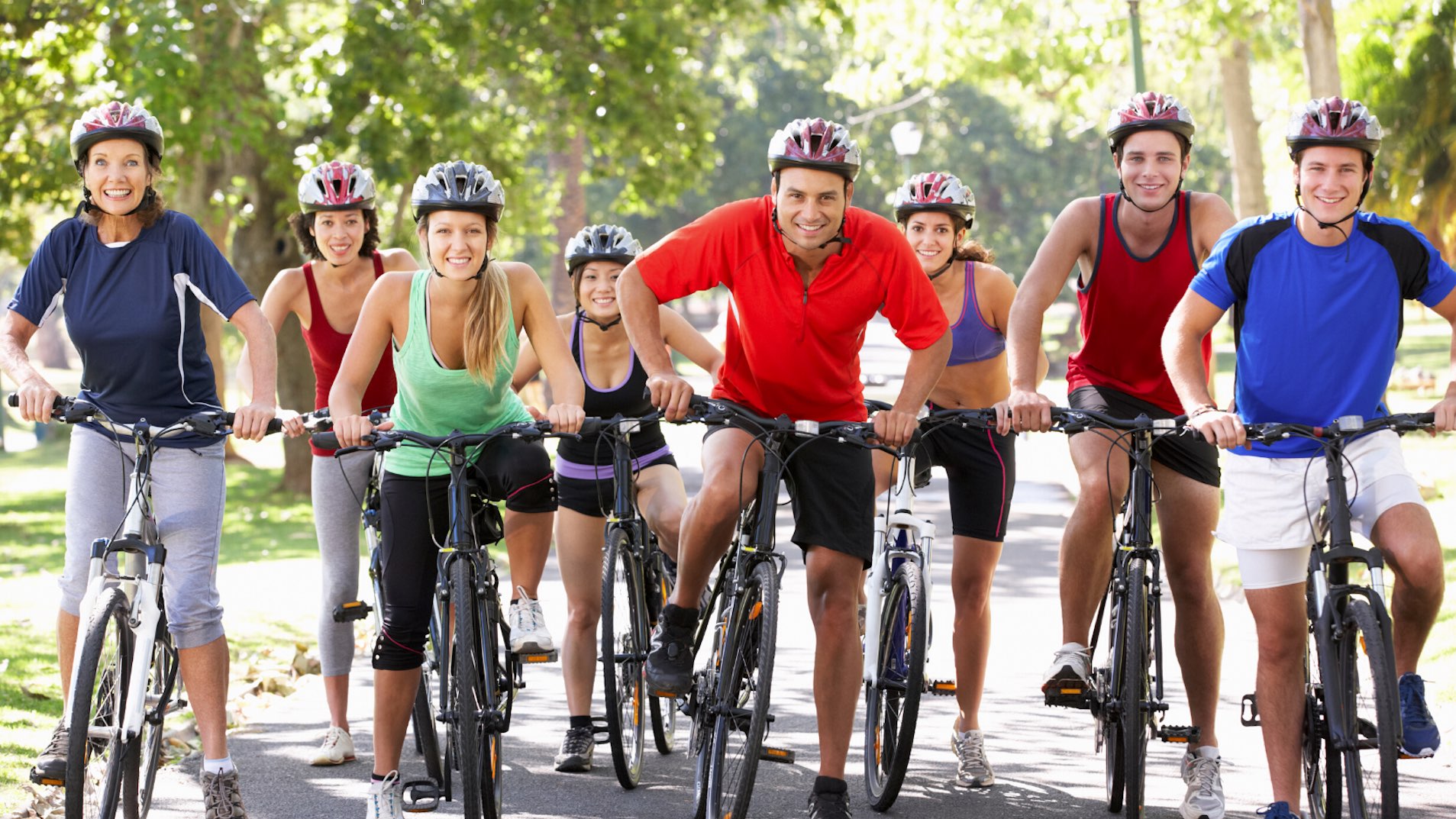 Well, this may seem rather obvious—if you’re losing weight and not aging as quickly, then you’d obviously seem more attractive!

This was confirmed by the British Heart Foundation, with their study involving 600 men and women. The study found that cyclists on average were thought to be 13% “cooler” and more intelligent than non-cyclists. About 23% of the participants also said that a cyclist would be their choice for their blind date if they were going on a blind date with an athlete.

A 2007 study found that riding a bike had a very positive impact on children and their health. It can even help with problems like attention deficit disorder too.

But people of all ages can have their brainpower enhanced through cycling. Another study even discovered that among the elderly it can reduce the chances of Alzheimer’s disease.

Cycling is a form of cardio exercise, and it helps your heart to remain healthy. A recent massive study involved monitoring 1,500 subjects for a period of 5 years. It was discovered that those who went cycling were 31% less likely to develop high blood pressure than those who didn’t take up the exercise.

But what if you already have high blood pressure now? It’s not too late to take up cycling either, because a strenuous bout of cycling can also lower your blood pressure just as much as your meds can. While it can’t replace your meds, you may want to discuss cycling with your doctor as it can help too.

Shedding weight and losing excess fat is one of the most popular health goals today, and that can be achieved with proper dieting and with exercises like cycling. One study conducted with older diabetic women showed that with cycling and dieting, they can lose visceral fat (the abdominal fat that surrounds your organs). Later it was found that the same principle applied to younger women as well.

A study was conducted on the riders of the celebrated Tour de France, and it was found that the sport actually made cyclists live longer on average. Those who were formerly professional cyclists lived up to an average age of 81.5 years. That’s a good long life, especially compared to the general population’s average life expectancy of 73.5 years. That’s an increase of 17% or an extra 8 years of life.

In another study, it was discovered that such benefits were for even casual bike commuters too. Those who once regularly used their car and who shifted to using their bikes instead were estimated to extend their life spans by an extra 3 to 14 months. This study even took into account the potential hazards of bike commuting.

Just to emphasize the point, another study also found that riding a bike for even less than an hour a week can cut your risk of early death by 23%.

For you to receive this benefit, you have to amp your efforts and opt for high-intensity cycling. This leads to major anti-aging benefits that can be seen down to the cellular level.

In cells, a decline in mitochondria can result in physical decline. But if your mitochondria function better then you’ll feel more rejuvenated. This is where cycling comes in. A study has found that high-intensity cycling increases your mitochondrial capacity.

You’re slimmer, you’re smarter, you’re less likely to have pain and die, and people find you more appealing and attractive. Of course, you’ll have higher self-esteem! But cycling also boosts your confidence and self-regard because when you ride a bike vigorously, you release a lot of “feel good” hormones that can make you feel as if you can conquer the entire planet.

Also, check out these 8 Ways to Recalibrate the Body to Boost Energy

2020 wasn’t a good year for everybody. With the pandemic forcing the government to control the number of social gatherings, psychological health risks are to be expected. The loneliness that comes with isolation and quarantine is a challenge most people...

Who says you need to get a gym membership to get in shape? The best thing about workout apps is that you can use them anytime, anywhere. And, with the pandemic, many gyms remain closed - these home workout apps...

The SARS-CoV-2 RapidPlex is a promising piece of technology that might just be what we need to bring the pandemic to heel. Being a new strain of the virus, COVID-19 is posing major challenges to health experts worldwide. Curbing its...

Can Stress Make You Sick?

Prolonged periods of stress can cause a number of physical symptoms and illnesses. Symptoms can come on as soon as your level of stress increases and worsen as stress continues. This fact has been studied by numerous scientists and most would...

DrinkLyte has come up with the perfect one-two punch for those of you that have had a little too much booze.  This one-two punch is two functional beverages aimed at helping consumers rehydrate after alcohol consumption.  They've recently launched their "Party-at-Home" subscription...

Exercise should unequivocally be an essential part of our daily life. It has long been proven that daily exercise not only keeps our body healthy but also lessens the occurrence of burnouts. However, not all can avail of gym memberships...

Advanced tech in clothing is not a novel concept nowadays. From spacesuits to day to day workwear, a lot of garments are already specialized to address various needs and requirements of different wearers. Most of them are designed to provide...

Want Super Soft Toilet Paper for Your Bum? WhoGivesACrap Got You Covered

George Costanza may have thought that nothing else can be done to improve toilet paper but the startup Who Gives A Crap begs to disagree. Many of us may have initially agreed with George but after getting to know what...

Finding the right therapist is a very tricky task that can be a huge hurdle for those who are already struggling. Frame Therapy aims to get you through that phase without a hitch. Many people fail to get what they...

15 Tips for Creating a Healthy Work From Home Routine

If you Googled the term self-care nowadays, you would be flooded with a wide range of results that some may seem like they are not related to self-care. During these pandemic times, it’s important to acknowledge that there is a...

How to Build a Profitable Ecommerce Store

Ritual is Committed to Creating The Purest, Most Effective Vitamin Formulations For Women, Men, and Kids